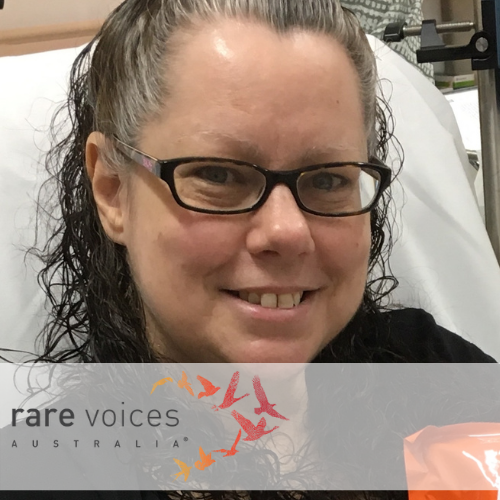 How to live half a life. I only live life a little bit. Not to the fullest, not with gusto and excitement. I live a life that I never planned for. I have a beautiful caring loving husband and two beautiful daughters, but they only get a little bit of me and this is not what I planned. I did all the things that every young women does. Finished school, went to university, got a great job and traveled the world. But I couldn’t work out why I never had as much energy as everyone else. I was always tired.

Then in 1998, something weird happened. I got a severe ear infection. I’d never had one in my life and the pain was horrendous. I was treated with antibiotics and steroids. But then it got stranger still when that year, I had another four ear infections. Three years and 15 ear infections later, I saw an ear, nose and throat specialist, but he could find no reason why I kept getting infections. So I carried on but just didn’t feel ‘normal’.

Over the next ten years, I had up to 50 ear infections and the infections were so bad that I was hospitalised on three occasions. I felt tired, had joint pains and just felt useless. I had given birth to our two daughters by this stage but I struggled to keep up with caring for them. I thought I was pathetic and lazy. Doctors handed me out antidepressants because they said I was stressed. One doctor told me I was having panic attacks. I had never had one in my life. I thought I was crazy and that the doctors thought I was wasting their time. Neurologists, rheumatologists, endocrinologists and ear, nose and throat doctors all dismissed me. Very few listened to me and very few spent more than 15 minutes examining me.

There is nothing more demoralising than being told you are perfectly healthy when you know there is something seriously wrong. I had studied medical science at Sydney University. I wasn’t stupid, but many medical professionals made me feel patronised and dismissed. I felt like I was going mad. I tried to be the mother I imagined I should be, taking the kids to the park, going to mother’s groups, hosting BBQs. In the end, I couldn’t do those things. I felt a failure and I became isolated.

In February 2015, in the middle of Cyclone Marcia (we live in Rockhampton), I got another ear infection and was hospitalised. But by now, something had changed. I got diagnosed with Autoimmune haemolytic anaemia. This is a rare and potentially fatal condition. I was treated with a high dose of steroids to force the anaemia into remission. All was going well and my anaemia was improving when I got another ear infection. This time, my ear, nose and throat specialist was on leave so I saw another doctor. He looked at my ear and almost immediately diagnosed me with relapsing polychondritis. He was stunned. He had never seen it before. I didn’t care what he thought, I just wanted the pain to stop. He could have amputated my ear for all I cared. I was so naive.

My new specialist said this is a very rare autoimmune disease that affects the cartilage throughout your body – it is life threatening. I was sent to a specialist in Brisbane who told me that this disease could make me go blind, deaf and it is progressive. It can attack the cartilage of the trachea and the larynx causing you to stop breathing. It also attacks the heart and kidneys and the joints in your body. It had for years, been attacking the cartilage of my ears. I was put on chemotherapy to try to suppress my immune system.

Being on chemotherapy is a whole different level of life. My week revolved around blood tests, chemotherapy injections and then nausea and tiredness. Motherhood for me was now completely different. I had to learn how to pace myself so I could attend functions. But the chemotherapy did help control my disease for about eight months and for some of that time, I could spend more quality time with my daughters and husband. Unfortunately, relapsing polychondritis is a progressive disease, with no cure and no definitive treatment.

By January 2017, my chemotherapy treatment began to fail and I developed tracheal and laryngeal problems. I couldn’t talk, swallow or breath. My heart valves had been attacked as well. I was placed on a high dose steroids again and a new type of chemotherapy. The pain was incredible and there were times when I had to tell myself that I would survive this episode. I spent most of 2017 just trying survive. I was admitted to hospital four times, had pneumonia, had two major tracheal flares where I could hardly breath, was neutropenic and got a really bad infection of unknown origin. I could barely walk as I had developed neuropathy in my legs. The pain was excruciating.

My specialists decided I needed to try a new drug that is used for lymphoma patients. But the problem was, it is not on the PBS for relapsing polychondritis patients and costs $10,000 per infusion. Relapsing polychondritis is so rare that there are very few studies that show what medication works. With support from my doctors, my case went before the High Cost Drug Committee and I was allowed to start my new drug under compassionate grounds.

Autoimmune immune disease is the most common chronic health disease in Australia and it mainly effects women. It is more common than cancer, heart disease or mental illness. Autoimmune immune disease is the forgotten disease, and for someone like me who’s disease only occurs in 0.71 per million, we are invisible. The new National Strategic Framework for Chronic Conditions lists equity and access as two of its key principles. These principles are challenging to meet for patients suffering rare diseases. Many patients live remotely and access can be difficult and costly and equity does not exist, as most rare illnesses don’t have a set protocol for treatment.

Most doctors have not heard of my disease and I am now the expert. Sometimes, that is not well received. I am half a mother and wife. The rest of me is defined by relapsing polychondritis and it is a lonely and isolating disease to have. I have lost my sense of identity to this disease. There is nothing in my life that gives me any satisfaction or self-esteem anymore, and the fact that the Federal Government gives no recognition to my disease leaves me fighting a disease with no assistance. I have to keep looking at my daughters faces to remind me that I have to fight for them, because no one else is going to help us.