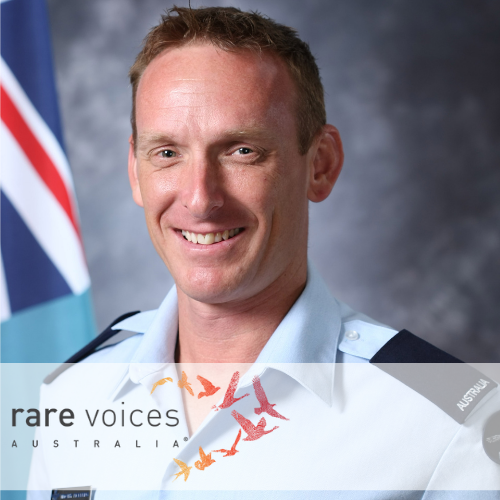 Back in 2014, I was a super-fit 40-year-old who had left life as a personal trainer and Ironman Triathlete behind to join the Royal Australian Airforce (RAAF) as an aviation fire fighter. I was living the dream as the saying goes. In January of 2015, whilst training for a long course triathlon, I started feeling weak and out of breath while doing basic training and conducting basic fire fighting tasks. Putting this down to nothing more than a cold I continued training hard. Progressively, the symptoms continued getting worse, however, I wasn’t actively listening to my body and again, continued to train.

February of 2015 came around and late one night, having just finished a night shift the day before, I felt extreme pins and needles in my hands, feet, and legs that would not go away. I felt like I hadn’t slept for days and my temperature was severely elevated to the point where I felt like I was about to self-combust (I later found out my temperature was 41.5°C). I went straight to the local hospital’s emergency department and was admitted straight away as after I saw the triage nurse, I basically collapsed on the ground. At first, I was wrongly diagnosed as having rhabdomyolysis due to my physical training volume for an upcoming race. However, after a few hours, I started feeling weaker and weaker and gradually lost all feeling in my feet and lower legs to the point where I could no longer move my legs as they felt like lead weights.

A neurologist was assigned to me and diagnosed me instantly with Guillain-Barre Syndrome (GBS). I remember at the time saying to him, “That’s great doc, how long will I be unable to train for?” Within 24 hours of being admitted to hospital and a mere 12 hours after being told I had GBS, I was transferred to the Intensive Care Unit (ICU), completely paralysed up to the neck, where I was intubated via a tracheostomy. This would become my new home for 103 days. Whilst in ICU I had deep vein thrombosis, pneumonia and a pneumothorax to name just a few of the conditions I developed. I also had a catheter for 115 days straight. I was treated with five rounds of plasmapheresis to help clean my blood of any antibodies, however, this did not work at all. Many times, whilst in ICU, I asked my partner to let me die or to turn off the ventilator as I was in such immense pain and on so many pain relief drugs, I couldn’t tolerate it anymore. Thankfully she ignored those requests.

After three and a half moths in ICU, I was finally starting to get some movement back in my hands and arms and after being taken off the ventilator, was transferred to a rehabilitation hospital that I would call home for a further five and a half months. I had to learn to talk, to use my hands, to write, to use my legs and feet all over again. This was one of the slowest, painful things I have ever had to endure in my life, and I am sure the physiotherapy staff must have wanted to harm me at times as I was not the most pleasant person to deal with. After starting rehab bed-bound, then moving to a wheelchair and then onto a forearm support frame, I graduated to wearing an ankle foot orthotic and was able to walk on my own by the end of October 2015. I was finally discharged from hospital and had bright hopes for a full recovery and resuming my career in the RAAF. I worked super hard with a fantastic team of health professionals to get strong again, however, after three years of trying, I realised I would have to live with the fact that I will always have bi-lateral foot drop and have to wear ankle foot orthotics permanently. A nerve conductivity test determined that I had extensive myelin degeneration and axon damage with no chance of regenerating or recovering. So, at the beginning of 2019, I was medically discharged from the RAAF.

Due to the GBS, I have a range of other health issues now including diaphragmatic palsy, sleep apnoea, acute sinusitis and essential tremors in the hands. However, being a part of the Invictus Games for Defence Force veterans, I realise I am lucky, and this experience helped to give me a different perspective on my life moving forward. I may not be able to compete in triathlons or skydive and scuba dive like I used to, but I can do things I haven’t tried before and live my best life as I am now.

I have completed a Diploma in Paramedicine and a Bachelor of Nursing. I am now a new graduate registered nurse and am able to give back to others after the amazing care I received while in hospital. I also volunteer with St John Ambulance NSW at community events. Don’t get me wrong, I still have bad days and still have the odd pity party where I wish I could do things as I used to, however, life is really what you make of it. A great neurologist once said to me:  “It’s not what happens to you; it’s how you react to what happens to you that will define you as a person”. When I was stuck in ICU, I wanted to punch him for saying that but now I want to thank him for those kind words as they will shape my future.

Lastly, I am also very fortunate to have the support of a very wonderful and loving partner who has put up with so much and helped in so many ways she will never be fully aware of and it’s because of her I am still here today.