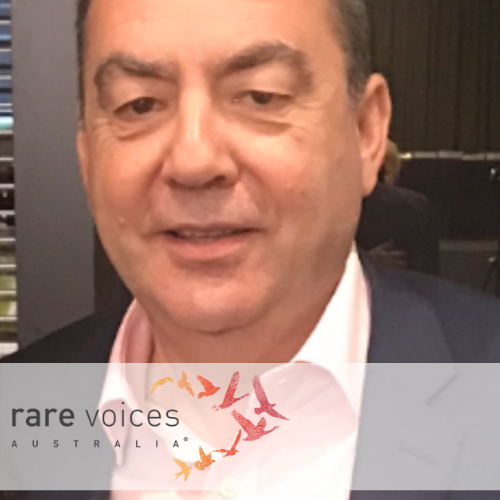 My father tells me that he was ecstatic when I was born. He was very proud that his firstborn child was a son who would be able to carry on the family name. Mum and Dad were both immigrants from Greece. Dad arrived in 1956 and Mum arrived in 1957. By 1958, they were married and I was born soon after in May 1960.

It wasn’t long before Mum and Dad realised that there was something wrong with me. From time to time I would cry incessantly for long periods of time. I looked like I was stressed – in pain and discomfort that would last for days. Eventually, they noticed the joints of my fingers would swell up and this coincided with the crying and the stress that was apparent in my face. I can’t imagine the thoughts that would have been circulating in the minds of my parents at this time coming from a small town in Greece to a big city halfway around the world where there seemed to be a lot going on but very few answers to their baby boy’s condition. What thoughts would any parent have when your child is apparently suffering but you have no idea what to do to help? You’re in a country that is still unfamiliar to you, and; you cannot speak the language.

The pain that I would experience in the joints of my fingers as a toddler was my first awareness of sickle cell pain and for the next 50 years, the standard treatment for my condition was pain relief, blood transfusions and staying hydrated. It was in 1963 at the age of three years old that I was diagnosed with Sickle Cell Anaemia. I spent a lot of time in and out of hospital with my parents always by my side. Hospitals were less welcoming in those days, with very strict visiting hours and rest periods for children. The overnight separation from my parents during these periods of pain was at times harder to endure than the pain itself.

By the time I was a teenager, my condition worsened and developed into more severe joint pain that I usually felt in the arms or legs and in later years, in the lower back. As the years went on, I learned to live with the symptoms of sickle cell pain. There was no preventative treatment at the time other than avoiding dehydration, over-exertion or infections. I had weekly or fortnightly appointments at the Haematology clinic at the hospital where a blood test and my haemoglobin level would determine if I went home after the appointment or whether I was admitted into hospital for a transfusion. I dreaded these appointments. I was looked after by great haematologists who knew about the condition and seemed to know what they were doing.

This particular hospital was the site of a lot of pain and loneliness for me and yet at the same time, I have very fond memories of the place as well. In 1978 when I was 18, I was transferred across to an adult hospital. This was when I began my dependency on the painkillers that were required to relieve my pain. Throughout this period and before, there were other patients that I came into contact with in the hospitals with thalassemia, leukaemia and other blood disorders but never anyone with sickle cell anaemia. There was no one to compare to or share similar experiences with. I didn’t have the opportunity to talk to anyone who had sickle cell anaemia until I was in my fifties when I was told there was a student with sickle cell anaemia in the school that I worked at – that was only a couple of years ago.

Sickle cell anaemia was a rare condition in Melbourne, Australia. Few people in the 1960s and 1970s had the knowledge or experience in Melbourne to treat sickle cell anaemia or even to effectively manage chronic pain. I learned to understand the triggers of a crisis as best as I could – but then often, I had a painful crisis for no apparent reason. This was the case when I was 27 years old, during the Easter break of 1987. I drove to Sydney with a couple of friends for the weekend and developed a painful crisis on the second night there. My friends had never witnessed the first couple of hours of a painful crisis when the pain is unbearable and the initial dosage of pain medication is insufficient to relieve the pain. They had always visited me at home or in hospital when the pain was under control and were shocked to witness the intensity of the initial pain in a crisis. They called an ambulance and I was taken to a Sydney hospital that had never treated a patient with sickle cell anaemia. They didn’t understand sickle cell pain and were not convinced that I needed high doses of analgesic to relieve it, so they reduced the dose to the bare minimum. I was in pain for a number of days before the pain subsided on its own.

My parents came to Sydney and stayed with me for almost three weeks until I was well enough to be driven home to Melbourne. When I was 29 years old, over the summer of 1989, I travelled with a group of my closest university friends to Darwin. The first few days were great but the lack of sleep and over-exertion on the trip resulted in a painful sickle cell crisis. I spent the next two weeks in a Darwin hotel room communicating with my haematologist in Melbourne with regard to the dosage of pain medication, keeping him updated on my progress. There was no way I was going to repeat what had occurred in Sydney a few years earlier and admit myself to a hospital to have my pain mismanaged unless I absolutely had to. I missed the planned plane flight to Uluru as my condition prevented me from flying and stayed in Darwin until I was well enough to fly home to Melbourne. There were many birthdays, engagements, weddings and other special events that I did not attend because of the unpredictability of this condition while I was growing up. That was just the way things were. It required me to be flexible and to adjust my attitude to life. Nevertheless, my condition has been the catalyst for pushing me to live my life meaningfully and with purpose.

I studied hard and obtained a Bachelor of Economics at Monash University and a Diploma in Education from the University of Melbourne. These were good years and I met life-long friends during this period. My studies propelled me to become a school teacher where I have been teaching full time since 1983 and at the same secondary college in the Northern suburbs since 1984. In 2011, I was referred to another haematologist and began apheresis (red cell exchange) treatment. This treatment was life-changing. I have not had a sickle cell crisis since December 2010. As a result of this, I was weaned off the pain medication throughout 2011 and by January 2012, was no longer dependant on this medication. This process of withdrawal from dependency on opioid pain medication was long and drawn out. It took two years from the start of the process of lowering doses to stopping altogether, and then going through a four week intense period of physical withdrawal followed by months of adjustment. This occurred over the period of 2011 and 2012. It was a long process but ultimately, very satisfying.

This process had its beautiful moments. Coming off this sort of medication initially makes you very sensitive to sensations. I remember feeling the sunlight on my skin like I’ve never felt it before or feeling every droplet of water on my skin while showering. These are sensations we can experience every day but rarely do we appreciate them the way I did during this period. The apheresis treatment eventually freed me from the many limitations that my condition had imposed upon me. It has given me the energy to live a normal life and it has given me hope. I have been able to continue working as a school teacher, this year celebrating my 35th year at the same school. I have been able to travel to Europe twice in the last few years and able to enjoy being in the water at the beach or a swimming pool for the first time since 1977 without the temperature change resulting in severe sickle cell bone pain.

A few years ago, while at work at school, I met a student who has sickle cell anaemia and for the first time in my life, I was able to share some of my experiences with someone who knows what it feels like. At 53, that was the first time I spoke to another person living with sickle cell anaemia. She has since graduated from high school, got married and is benefiting from apheresis treatment at the same hospital just like I am.

One of the most important things that I wanted growing up and I didn’t have is information. Information is hope. Information about this disease. What’s likely to happen in the future? Will I be able to hold down a job? Or a long-term relationship? Or have kids? These are questions that consumed much of my thinking as an adolescent. I now wish I could go back and tell my 13 year old self that everything was going to be ok. I wanted information from doctors who had actually looked after patients like me, and information from patients who were walking the same path as I was and could share their experiences. Greater awareness and education of this condition among doctors, nurses, health care workers as well as patients, parents and supporters is needed.

A standard treatment across all hospitals is also necessary. Also, more research into sickle cell disease (SCD) is needed. Having only two FDA approved drugs for SCD in all of these years is deplorable. From my own point of view, I am satisfied to be able to continue with the red cell exchange treatment as it has been so life-changing for me. If future stem cell therapy or gene therapy allows for a cure in adult patients without too many complications, then that may be an option for me. I am currently feeling very lucky to be receiving the treatment that I am getting.

Right now, RVA Partner, Australian Sickle Cell Advocacy Inc, can provide that sort of information that was lacking when I was growing up. It advocates for the sort of awareness, treatments and testing that one day will lead to a cure for all people with SCD.