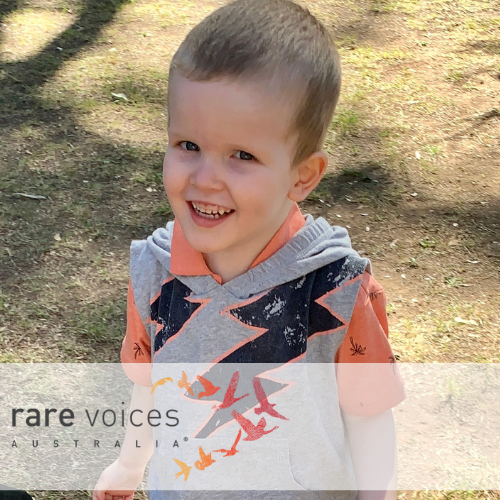 When I fell pregnant for the first time in 2014, I was overjoyed. I had always wanted to be a mum. My pregnancy was amazing and I loved all the tiny flutters I could feel when the baby moved around. The fact that I never felt any hard kicks was probably the very first sign something was wrong.

In June 2015, we were blessed with our first child, a beautiful baby boy named Lachlan (Lachy). After a really fast labour (40 minutes), Lachy spent the first week of his life in special care. He had a poor sucking reflex, jaundice, poor temperature regulation, and a really low white blood cell count. We began phototherapy to treat his Jaundice, and doctors continually monitored his blood levels. His little feet looked like pin cushions from all of the blood tests! When a nurse asked me if I was on any medication when I was pregnant, I went into panic mode. Drugs during pregnancy can have serious consequences for a baby — something must be seriously wrong! Thankfully, his white blood count improved and his jaundice cleared so we were sent home. No one picked up on his extremely low muscle tone although they should have.

When we brought Lachy home, life seemed so good. Easy pregnancy, fast labour, a gorgeous baby that sleeps all of the time. I could have ten of these! How easy is this parenting thing? How wrong was I? I joined a mothers’ group and as the weeks progressed, I noticed more and more differences between Lachy and the other babies. When I picked the other babies up, they seemed so light, Lachy would just flop in my arms like a sack of potatoes. He had no truncal muscle tone, so he couldn’t hold himself up. He had pretty severe reflux and would just stare at lights or ceiling fans. He never put his feet on the ground, or weight bared. He never cooed or babbled. But most of all, he slept all of the time, regardless of the surroundings.

When I raised my concerns, friends and family thought I was being paranoid or willing something on him. Even the first paediatrician I took Lachy to told me there was nothing wrong and he would grow out of it! I knew in my heart the doctor was wrong, so I took him to another paediatrician who ordered more testing. Even then, we were playing a waiting game. He had so many tests including bloods, MRIs and EEGs. All of these came back clear. I was starting to feel like the hypochondriac mum who shopped from doctor to doctor for answers.

In the meantime, I was attending seminars on autism and we decided to self-fund therapy as we knew how important early intervention is. Eventually, we found a paediatrician who gave Lachy a blanket diagnosis of hypotonic cerebral palsy and global developmental delay. He told us that Lachy was definitely exhibiting the signs of autism but that he was too young to diagnose. How awful that we had to search for a medical professional that could give us some sort of documentation to help open up networks of therapy to help our little boy.

We were eventually referred to a wonderful neurologist. My first appointment with her felt more like a therapy session for me. It was the first time I truly felt heard that my concerns for Lachy were real. She ordered more testing and at my request, referred us for genetic testing.

Genetic testing unveiled a mutation on the SCN2A gene which is almost certainly causing Lachy’s severe autism, intellectual disability and hypotonic cerebral palsy. When we received Lachy’s diagnosis, we didn’t feel an overwhelming sense of doom, if anything there was a sense of relief. Relief that I didn’t do anything wrong during pregnancy. Relief that he didn’t inherit it from me or my husband. Relief that his younger sister wasn’t carrying it either. He just won the genetic lottery and no one knows why… yet! His diagnosis meant now we have something to focus on.

We are currently participating in a natural history study, and as more becomes known about SCN2A, more research can be done on targeted gene therapies. The therapy journey has been nothing short of torturous, for us and for Lachy. That’s not to say we haven’t had some amazing therapists along the way. We never thought Lachy would be able to walk, and he is now starting to climb. We are starting to teach him how to communicate using a communication device, and we are even ordering him a customised bike! I think we have tried or researched almost every type of therapy out there from the traditional speech and occupational therapy (OT) to specialised diets that impact the gut microbiome. We were hoping for a miracle and that somehow something would click and Lachy would just become ‘normal’.

It is very hard to accept that your child will never look at you and tell you they love you. That they may never be able to go to the toilet themselves, or even dress themselves. But that is Lachy’s normal, and we love him regardless. There may not be any treatment for Lachy’s symptoms, but there is so much research and progress in the field of genetic studies. I am grateful that we live in a country where we were able to find answers. Because of Lachy’s diagnosis, there is hope for us and anyone impacted by genetic disease.