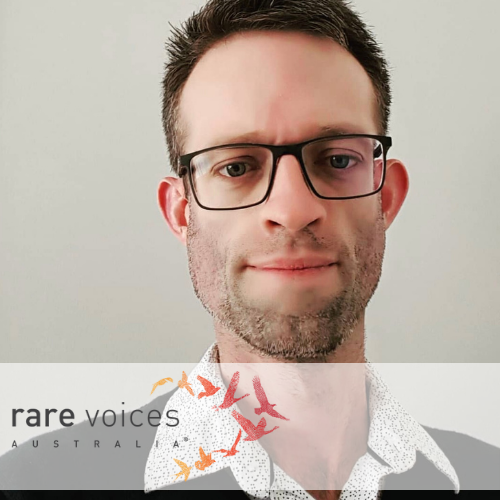 I was diagnosed with Juvenile Dermatomyositis (JDM) when I was three years old. JDM is a juvenile form of Myositis, a rare group of autoimmune diseases affecting the muscles.

Mum and dad noticed something was wrong when I went from being an energetic and active boy, to wanting to go home and rest instead of running around like usual. My health declined rapidly over six months and I was soon diagnosed with JDM. Early on, I was prescribed two drugs. Initially, the condition started as a rash around my face and soon, my muscles became very weak. It wasn’t long before I could no longer walk. My health was at its worst between the ages of three and six.

As I grew older, I simply didn’t have the strength to perform or learn simple tasks such as being able to dress myself. As I got older, I found having a rare disease to be very isolating and the daily challenges remain difficult for the wider community to understand. Thankfully, I didn’t miss huge chunks of school as my condition was relatively under control by the time I went to primary school. I was surrounded by a great friendship group who were understanding and teachers who tried their best. I had a carer who helped me learn how to type. While there was the odd snide comment here and there from kids at school, I mostly only felt like an outsider when interacting with strangers. For example, when I’d be down at the beach with my family and a child would point at me and say something like, “Why is he so skinny?”

Thankfully, I have been in remission from JDM since I was eight years old (I am 40 now). Although common, remission from JDM means different things for different people. With the help of doctors and physiotherapists, I was able to learn to walk again (although I still walk with a limp), which was a significant milestone. I remember my parents incentivising me to walk from a young age. I’d get a piece of LEGO for taking a few more extra steps than the day before and something more significant for climbing steps. These days, every year, my health gets a little better and I feel a little stronger. I’m now enjoying great general health overall. While I sometimes worry about relapsing, I do my best to live life to the fullest and try not to think too far ahead.

Since being in remission from JDM, I have graduated from university with a Bachelor of Arts (International Relations), travelled overseas and am now currently involved in my family’s start-up business. When I was in my late 20s, I decided to connect with others living with Myositis. I wanted to help others in some way. For the past 10 years, I’ve been active as a member (including as a board member), for an Australian organisation comprised of volunteers that is raising awareness for people living with Myositis, RVA Partner, Myositis Association Australia (MAA). In my spare time, I enjoy playing guitar and composed a short tune for Rare Disease Day called, It’s not always fair to be rare. I am always interested in hearing other people’s journeys with rare disease, and I hope my story has helped you in some way.

Lachy is one of our 2022 RVA Ambassadors!