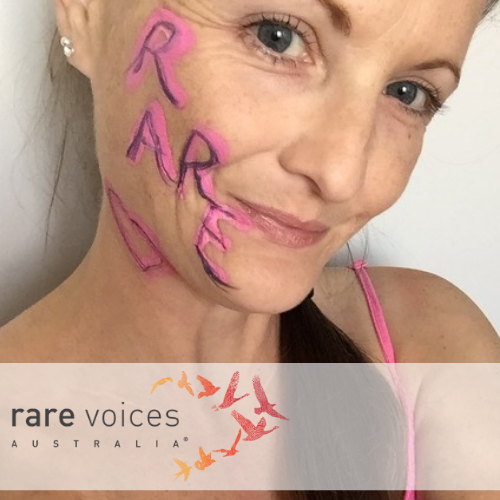 CIPO is a motility disorder. My small intestine often stops working (as if there is a physical blockage) – even when it is working, the movement is much slower than that of a healthy intestine. Slow transit time through the digestive tract causes bacterial overgrowth and often, translocation of bad bacteria from the gut into the bloodstream (known as bacteremia), resulting in even more illness. Unable to absorb everything I need from food in order to live, I have to rely on home parental nutrition (HPN) for sustenance.

Intestinal failure requiring HPN is extremely rare with less than 300 people across Australia and New Zealand who fit into this category. See the Parenteral Nutrition Down Under website for more information.

As with many other rare diseases, I also have other medical issues to manage in addition to the CIPO, which add more layers of complexity to my health management.

I was a completely healthy child… up until the age of eight-years-old. Then, seemingly out of nowhere, a mysterious illness knocked me over and ran away with my childhood.

It started with abdominal pain, severe bloating, back pain, vomiting, diarrhoea, reflux and radical weight loss. Doctors and other health professionals worked an entire year to find out what was wrong with me.

At nine-years-old and down to a weight of 23kg, I was finally diagnosed with CIPO by a gentle, concerned gastroenterologist who would continue to oversee my healthcare during my childhood and adolescent years.

My rare disease was only found because a visiting radiologist from the USA was present on the day that I had a barium swallow test. The radiologist had previously seen CIPO in America.

In 1992, there were only 52 other known cases of CIPO in the world and HPN was not considered a good long-term treatment option.

Rare was big in my childhood

I looked like an anorexic girl, all skin stretched over bones with a white face and dark rings under my eyes. Unlike those suffering with Anorexia Nervosa, I ate food and as a result, carried around a huge, angry belly on my stick figure.

I lay about a lot (often on my mother) due to malaise and lethargy. I wasn’t absorbing adequate nutrition so I was constantly exhausted. I had sleepless nights, missed out on school and frequently begged for it to all ‘go away, please!’ because the pain was often unbearable.

My growth stunted and by age 13, my bone density was delayed to that of a 10-year-old. I was also still a long way from beginning puberty.

During the six hard years from age eight to 14, I depended on daily nasogastric tube feeds and ate as much real food as I could. Having extra nutrition pumped into my sluggish gut was a living hell and for all the pain and grief it caused, did not add much substance to my bony frame.

Gaining weight became the biggest focus of my childhood. Fattening me up was everyone’s number one goal but with a small intestine that didn’t work properly, this only equalled increased suffering.

Other organs began to fail in addition to my small intestine. Every day was riddled with anxiety. I developed severe anxiety and depression as a result of both biology and circumstance.

After countless hospital admissions, intravenous nutrition (HPN) became the only possible treatment left to try. At age 14, I started HPN as a very last resort, via a central line in my arm. The risks were great.

I gained energy, grew taller and fatter and finally started developing into a young woman. Although I gained new life, I didn’t have a normal adolescence but it was a huge improvement on the life I had with nasogastric feeds as a child.

More than a few complications

I soon exhausted the use of central lines in my arms and cycled through several infusaports placed in my chest for long-term intravenous access. This required many admissions to hospital and treatments for either infection, technical hitches with my line or the new strain of illness I soon became familiar with (theorised at the time to be an inflammatory response stemming from my gut).

This new illness was mysterious. There was no evidence in the medical world of anyone else suffering from the same combination of symptoms. I experienced raging fevers and severely abnormal blood work, among other things. After a couple of trial and error years, my gastroenterologist found that steroids treated the mystery illness. Today, there is evidence to suggest that the early formulation of HPN I was on may have been the cause of the frequent inflammatory response.

I developed a hyper-vigilance about my body’s functions and felt deep shame about the way I looked. I was highly stressed in social situations and this was mainly because I lacked control over my body. I always had unpleasant symptoms and a tube, somewhere, hanging from me that if I didn’t hide, invited unwelcome attention.

Society taught me that I had to hide my embarrassing IF symptoms and treatments if I wanted a chance at being accepted. Kids at school would tease me almost every day. Adults would give me exclusive attention that I didn’t want. I was so radically different from my peers and at my core, I felt defective.

My early life of rare illness caught up with me in my twenties. I started antidepressants and psychotherapy. Sickness and medical experiences contributed to complex trauma, unhealthy thinking and maladaptive behaviour.

I’ve been on HPN as life support for 22 years now. It helps – a lot – but it isn’t a cure for my rare disease. Like real food, the effect of HPN runs out and the tank has to be topped up regularly. I can’t do without it for long.

On HPN, I look a lot healthier than I often feel. Intravenous nutrition gives me a much better quality of life (in fact, it saved my life at 14), but it’s important to understand that HPN is an expert at disguising the brutality of intestinal failure.

Social occasions centred on food and eating are problematic at best. I become dehydrated during the day when I’m not infusing fluids. I’m restricted with what I can do at night due to infusing the HPN over 12 hours.

Some of my life-threatening concerns are liver damage (from the HPN), central line infections, central line malfunctions and loss of central venous access (my overused veins are terribly scarred and either tricky to work with or completely useless).

Thank you for reading

People rarely hear about the rare cases. This is why it’s so important to raise awareness about rare disease – so others can understand and support those of us who don’t fit into mainstream boxes.

Intestinal failure is rare, misunderstood and produces symptoms that are unfit for society. Us IF bods are the minority and don’t carry the mass appeal and familiarity of illnesses such as cancer, diabetes or multiple sclerosis, but we too deserve to be understood and given a fair go.

We live in an era of ending stigmas. I’m only one voice of many out there with a rare disease. We need support. Thank you for reading this post and in doing so, caring about us rarities.