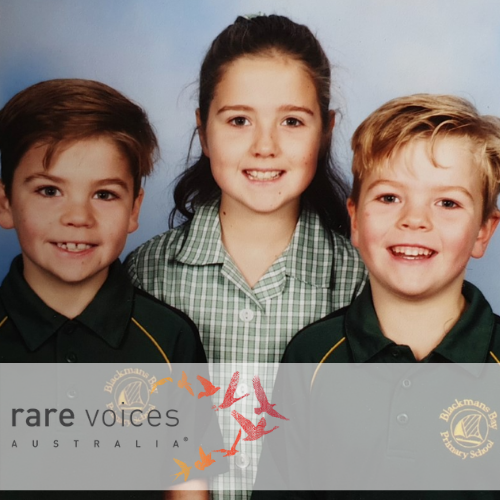 From left to right: Caleb, Jemima and Fin

My name is Jemima and I am 12-years-old. This is my story about having a brother with the rare disease known as Tuberous Sclerosis Complex (TSC).

I always knew that my little brother Caleb was special. He’d had two heart surgeries by the age of 7. But we didn’t know that there was something else special about him that was very hard to spell and very hard to pronounce and was about to change our lives.

Thursday, 7 June 2018 started like any other day. Well, sort of. Mum, Dad and Caleb had only been home for two weeks after Caleb’s open heart surgery and it was school photo day so we had to get our hair perfect. This was going to be our first sibling photo with all the Chalk kids – me, Caleb and my other brother, Fin. Fin was very excited.

I had already had my class photo taken when I was told to get Caleb and Fin for our family photo. I went to Caleb’s classroom first, but his teacher said he’d had a fall and gone to the office. Walking to the office a lot of things went through my 10-year-old brain, “Would Caleb be okay? I thought the doctors had fixed Caleb’s heart? Man, I’m hungry.” When I got there, the office lady told me that Mum had picked Caleb up and to go back to class.

I felt like a puzzle with a missing puzzle piece. I tried to get on with the day, but that puzzle piece just wasn’t there. When the day was finally over, Dad picked us up. As great as it was to see him, I knew something was wrong. Dad was pale and had lost the fun glint in his eyes. In the car, he told us that Caleb wasn’t feeling too good and that Nanny and Pa would look after us as he had to go back to the hospital. As fun as jumping on Pa is, it just didn’t have the same feel to it that day.

Friday was our HeartKids fundraiser at school and Caleb couldn’t go. He was back in hospital. This day was supposed to be our celebration day – all the surgeries were over and were successful. Of course, more surgeries were still to come, but I didn’t know that then.

That night, just as I was going to sleep, Nanny had a phone call. After she was off the phone, I heard the squeak of the stairs as she came up to my room. I looked into her kind face and I knew something was wrong. She told me Caleb was having emergency surgery on his brain. We cried for about an hour. I didn’t think I would ever get to sleep that night and I didn’t. I wasn’t the only one who didn’t sleep that night.

The doctors had found a brain tumour and Caleb’s brain was bleeding. They put drains in his head to relieve the pressure.

The next day, Saturday, we went to the hospital. Mum met us down in the foyer. Even though it was only two days since we had seen her, it was incredible to see her beautiful face. She looked extremely tired and was still in the same clothes she’d been wearing on Thursday morning. I told her she was smelly and that made her smile for the first time in days. We went to see Caleb in the intensive care ward. Fin couldn’t come as he had a cold. Caleb was awake but couldn’t move because of the drains in his head. I tried to not look surprised by his shaved head and all the machines connected to him.

Caleb was very weak but still told me all his new jokes. And all of a sudden, he just fell asleep. I looked at Dad. “He needs some rest. Just let him sleep,” Dad said. I thought Dad needed sleep too.

The doctors couldn’t operate right away. They needed to wait a couple of days for the aspirin Caleb had been taking to stop having an effect on his blood. This was a risk as Caleb’s heart was still recovering.

On the day of the surgery to remove the tumour, Fin and I were at our family friend’s house, making gingerbread men and piling them with lollies. At the time, I didn’t know Caleb was in surgery until Mum and Dad came in. I hadn’t seen them together outside the hospital for what seemed like forever even though it was only a couple of days. And after that, gingerbread men were never the same again. Mum told us that after 10 hours in surgery Caleb was finally conscious. He’d had a tumour the size of a mandarin removed from the right side of his brain.

After that it was a blur of going to school, going to the hospital and worrying. Then one fine sunny day, Caleb’s old prep teacher came to me and said, “Caleb’s in the ward!” Even when we were problem solving in maths the smile never left my face.

And then the magic night arrived. I had just had squad swimming and my friend was dropping me off. But instead of Nanny opening the door, it was Mum and, in the kitchen, I heard Dad’s voice. But there was another voice too, a voice that normally I had to go to the city to hear. I didn’t believe my ears. Caleb was sitting at the bench eating his dinner. A normal thing to do but still so special. The missing puzzle piece had been found.

A few weeks after his surgery, the doctors confirmed that Caleb’s tumour was a subependymal giant cell astroctoma (SEGA). In another couple of weeks, he was diagnosed with Tuberous Sclerosis Complex or TSC. I know, right, too many big words in this paragraph!

The next year we finally got our school family photo.