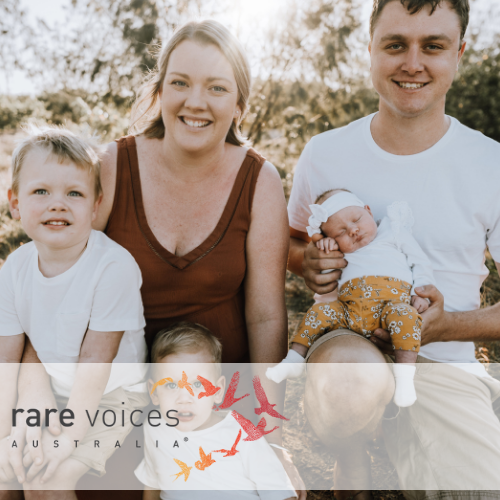 It was July 2020 and our son, Jacob, was 21 months old when his epilepsy journey began. We had just had family photos taken with our new family of five after we had our daughter. Jacob went to sleep and that night, we woke to him having his first ever seizure. This began a very long road that included a lot of hospital admissions, helicopter rides to bigger hospitals and even being transported via a jet to Brisbane.

It wasn’t until October 2020, when we had a telehealth phone call with our team down in Brisbane, that we were told about Jacob’s SCN2A diagnosis. All I remember from that phone call was Jacob’s neurologist saying his new diagnosis and that it was rare and there was no cure at this stage. The rest of the phone call was blacked out. I got off the phone and just cried. I was at a loss.

All you ever want in life are healthy children, and when you have a child with medical needs, it is such a hard journey and one that never seems to get any easier.

I remember Googling straight away what SCN2A was. The first paragraph I read on one particular paper said that there was a life expectancy. To process your son has epilepsy is bad enough, to process that his life may be limited was a whole new level. I have lost count of the amount of tears and hours that have been spent staying up late at night researching all the possible avenues and reaching out to other families who are travelling a similar course.

We had a big window where seizures were under control. We were one day shy of being 11 months seizure free. It sounds funny to most, but in my head, I was planning how we could celebrate 12 months of no seizures as a family. That to me was more important than celebrating Jacob’s third birthday. That hit me really hard when his seizures returned. The disappointment got the better of me and I found myself heading down a dark tunnel. I wasn’t happy and was grieving a child who was still there right in front of me, and a life that I had always envisioned, was slowly being taken away.

Jacob’s development has always been behind and his communication is very minimal. We are so grateful for his happy personality and the strength he has 24/7. Unfortunately, the constant seizures have such a negative impact on his development. He goes one step forward and then three steps back. Since June 2020, we have trialed nine different antiepileptic drugs (AED), three different cannabidiol (CBD) oils and four different emergency medications. And we still haven’t found the right ‘magical’ combination to stop the seizures.

With each new AED comes new side effects. When Jacob’s journey first began, he was prescribed a drug that I read a lot about and it made me extremely anxious. I was at home one morning with our three kids while my husband was at work. Jacob had latched onto his little sister’s finger, who was eight weeks old at the time. I had to jam my finger in his jaw to get him to let go. I remember ringing our neurology team and they couldn’t make sense of me because I was so upset. Before taking this drug, my son was the most free-spirited child. He absolutely loved life, he always had the biggest smile on his face and loved a good cuddle. Yes, the drug stopped the seizures, but it wasn’t worth the pain and upset.

SCN2A has caused us a lot of tears and worry. It’s something I wouldn’t even wish my enemy to go through. It really is such a rollercoaster of emotions. Now that Jacob’s going on to three and a half years old, he looks ‘normal’ and like a fully gown little boy. We get people coming up to him in the street and trying to have a conversation with him. It breaks my heart every time I have to say, “Sorry, Jacob can’t talk”. I see other families who have healthy children who can communicate and socialise with others. It’s a grieving pain that I hate myself for even feeling,  but it’s something I’ve come to live with. Our eldest son Luke, who is five, tells people that his brother is sick in his brain. It’s such a big topic for such a little mind to comprehend. He’s had to grow up so much faster than his friends because he’s relied upon so much at home.

Thankfully, there was an online community that I reached out to. I have connected with other parents all over the world. I’ve connected with other professionals in Australia who have been such a great source of knowledge in this new SCN2A world that is such a huge part of our lives. I’ve since joined the Rare and Genetic Consumer Advisory Group. I’ve put Jacob’s name in nature studies and am continuously following any clinical trials that may help Jacob’s particular variant.

I worry every day about what life is going to look like in the future for Jacob. Even with simple milestones like going to school and making friends. I long to hear the words, “I love you, Mum”.

Living in a small rural town proves quite challenging with a child with developmental delays, possible autism and low muscle tone issues. It’s very hard to come across therapies that are targeted for younger children without having to drive over two hours one way.

Having a young family, plus our Jacob with everything that he brings, you need to find people who can support you and accept your child for who they are without the judgement. Finding that village to help lift you up is what we need to keep pushing through. Unfortunately, this isn’t an illness that he will ever outgrow and it’s something that’s with him for life. We just have to keep fighting for our boy and give him the best possible life he can have.