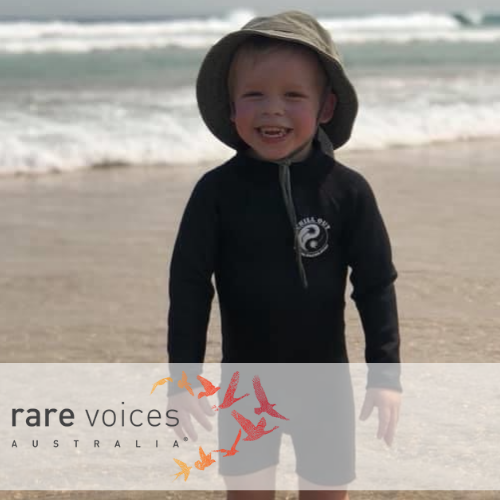 Meet Hudson. He’s a typical toddler that has had idiopathic thrombocytopenic purpura (ITP) for nearly his entire life. Learn a little about his journey through the eyes of his parents Brianna and Trent.

Hudson was born on December 2016, healthy, happy and absolutely thriving! He was such a calm and easy baby despite his first winter being a little tough. Hudson had one case of gastro and common colds that would come and go for around six to eight weeks. During that time, I took him to our GP three or four times to get his chest, ears and throat checked because I was worried it was an infection as it was going on so long. We were reassured that everything was fine each time and come August he seemed better and the illness was put behind us.

Around four weeks later, as I was changing Hudson I noticed some purple little-prickled dots on his ears. I thought it was strange but thought that maybe it was a reaction to some of the new food he was tasting; because there was nothing around his mouth I didn’t believe he needed to see anyone, maybe it would just go away?

Two to three days after I noticed the dots on his ears (petechiae) I noticed some black bruises on Hudson’s legs during a nappy change. I was shocked at first, I couldn’t understand how a child who could not yet crawl or walk could have bruises on his legs! I began to take his clothes off and check anywhere else for bruises, I started to fear he had meningococcal. Much to my surprise there they were, more and more purple dots covering his tiny torso, arms, wrists and fingers!

I started to panic, and I rang our local GP straight away; they said we could go down without an appointment but may have to wait a little while.

When we saw the doctor, he did all the regular checks — ears, throat, chest, and looked at the dots and bruises on Hudson. The doctor told me at that stage Hudson would need some blood work done. I felt pretty casual about it and he started printing out the pathology forms.

At that moment I laid Hudson in my arms for a bottle, again another shock before my eyes; his nostrils covered in fresh blood. I told the doctor and he started dialling on his phone; I didn’t know at the time, but he was ringing the hospital paediatrician.

They told him that we immediately needed to come to the hospital and it was probably ITP. I look back now, and I felt so calm, surely it wasn’t that bad, was it?

I went home and packed our bags and we made our way to the hospital. Little did I know that those four walls would soon become our second home.

When we got to the hospital we were rushed through emergency and our baby went through his first blood draw. We waited patiently for results and Hudson continued to be his happy self.

A few doctors came in around an hour or so later and told us that Hudson’s platelet count was two, which is extremely low and extremely dangerous. We were admitted overnight and saw the paediatricians in the morning who decided that Hudson needed to start high dose steroid treatment.

They explained the basics of ITP to Trent and I and told us that most children who have this after a viral infection soon get better without treatment, they told us that Hudson should be better within six to eight weeks. I remember thinking, six to eight weeks, he’s going to be sick for that long, I look back now and feel as though I had been lied to in a way, because 14 months later, Hudson was still battling every day.

The steroids changed our little boy, he went from happy and laughing to being moody and irritable constantly, he forever wanted to eat and drink and my perfect sleeper was now not enjoying rest time at all.

Over three to four weeks Hudson’s platelets went from 2 up to 56, they were happy with that number for that stage and decided to wean the dosage down because of how irritable he had become. We reduced the dose over the next three weeks and his platelets eventually dropped back down to nine.

Our paediatrician decided that we would up the dosage to the high full amount again for another week or two and see if that would make a difference. By week eight and nine the steroids were failing, in two weeks the platelets went from nine to 10. Between all of this craziness of steroid treatment we had a paediatric appointment once a week, two blood tests weekly and two hospital registrar appointments in the ward per week.

The discussions between the doctors amongst all of this were to start another treatment, the long-term effects of steroids on someone so young wasn’t good for Hudson’s fresh little organs or behavioural characteristics.

They made the decision to start using intravenous immune globulin (IVIG) on the 24th October 2017; I remember them explaining the risks of IVIG to Trent and I and presenting me with the consent form to show that I knew the risks; I consented because I felt like what other choice did I have? The first line treatment had failed and I needed Hudson to get better, he had to get better; so I signed and they started as soon as they could. Our paediatrician had decided to do two consecutive treatments as that would give Hudson the boost he needs to hopefully get him back to his normal level. He responded well to both and five days later his count was 303. I cried with joy, I couldn’t believe it, I honestly thought our ITP ride was over.

The celebration for Hudson was short lived and within the next 21 days, Hudson received three more IVIG treatments. Our wonderful doctors were baffled and that was when they then pulled us aside and explained he should have been lasting four to six weeks with the double dose; they explained that they still thought Hudson had ITP but they also needed to check that he didn’t have leukemia.

The doctors explained ITP presented the same as childhood leukemia and Hudson was classified as ‘too young’ for ITP like this as he was only eight months old when diagnosed. Hudson’s battle was now too big for them at our local hospital and it was then we were referred to our amazing haematologist in the city. We saw the haematologist two weeks later, he ordered more bloods and organised a bone marrow aspirate for Hudson the day after his first birthday.

On 20 December 2017, we arrived at the city hospital and Hudson underwent the procedure, he coped really well and wasn’t in much pain afterwards at all. Much to our surprise, his count during the surgery was 163 just two weeks after IVIG, that usually never happens; but most of all his marrow results were clear of cancer and characteristics of those who have ITP.

After that, Hudson’s body started grabbing onto the treatment more. As of January 2018, he started having just two IVIG sessions per month, and monthly blood tests. It was a welcomed relief to not have to put him through so much pain and discomfort as often as usual.

April 2018 provided us with more results with Hudson going four to six weeks between treatments and only needing one IVIG.

On treatment days we see our beautiful nurses in the city, they have been so helpful and make Hudson a little more comfortable when receiving his treatments. They also helped us find support from Challenge who support families living with cancer and blood disorders.

During treatments Hudson has a play therapist who finds activities for him to do to pass the time and also comes in with us to get his cannula in; this provides great distractions, sometimes.

At this stage, our biggest battle for Hudson is getting his cannula in for treatment. His little veins are full of scar tissue which means the drip goes in, but it’s hard to get the right spot for the flow of it. Hudson becomes increasingly distressed because of the number of times they try so we are in the midst of coming up with some different plans to help. Lately, they have been using light sedation to make him calmer.

Nothing has hurt us more than seeing Hudson go through the pain of ITP, especially getting a drip in, to see your child bruise from crying so hard really puts what you’re dealing with into perspective and how dangerous it can be.

The after effects are also horrid, Hudson refuses to look at the skin on his arms and gets distressed when he wears a short sleeve shirt, pointing to his arms where the needles go, saying “ouch, ouch”.

Hudson has had horrible symptoms for a while because of ITP; he would be off balance and dizzy which would cause falls; he would vomit from nausea that came when his platelets were low and then he would also get bruising from the pressure that came with throwing up. We struggled not to panic when he was learning to crawl and walk; it was a fearful time.

Hudson’s symptoms now differ when his counts are high or low. He gets petechiae spots around 40 and lower, nasal passage bleeding when under 10. Bruises anywhere from 80 and under and mouth blisters when he’s 30 and under. It gives us comfort to know that our haematologist will treat us accordingly. He explained that they will always give him treatment when he clearly needs it, and not to panic or worry that it won’t be available because for Hudson, treatment will always be there when he needs it.

Hudson is now classed as a chronic patient. He may go into remission, he may not. We have learned to live with it and take each battle as it comes now. Hudson sees his haematologist every eight weeks, bloods are done monthly and treatment takes place every four to six weeks or when needed.

Hudson is so strong, so supported and so brave, we are very proud of how he’s been fighting this battle at such a young age!

Awareness is the key to a cure, and hopefully, one day that will be found!

As of December 2019, Hudson was celebrated as being ‘in remission’ after holding a stable platelet count for six months after enduring 20 IVIG treatments over two and a half years. We have been so pleased and are so happy that for the moment he is well. Catastrophic illnesses may make Hudson relapse later in life so we are doing all we can to keep him healthy and strong. He’s starting to live a normal childhood and is going to kindergarten which he loves.

We hope our journey will give lots of other parents hope in such distressing and negative times — Brianna, Trent and Hudson