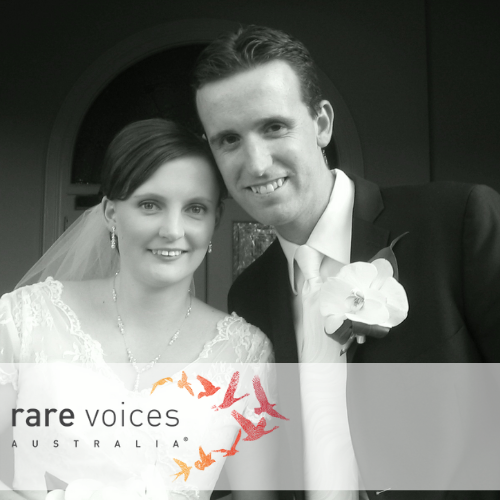 Most stories about Fibrodysplasia Ossificans Progressiva (FOP) start from a young age. My story is different. For me, FOP is only a relatively new “friend” I’ve had since 2009 when I was diagnosed at the age of 29. I led a fairly normal childhood. I participated in sports such as netball and horse riding, and as a teenager, tried ice skating and ice hockey (which I hated!). All of these activities would be highly discouraged for a person living with FOP and I am lucky that these activities did not cause significant issues during my childhood.

Looking back, there may have been signs that my FOP “friend” was with me all along. Things such as my noticeable walk, which included fast small steps with my head down, and my stiff neck. But as I have normal toes and no known flare ups as a child, FOP went undiagnosed.

From my early twenties, when I first noticed lower back pain, I found myself in the public and private hospital system. I was moved around from doctor to doctor, all of whom were unsure of what exactly was the problem. It was clear that I had something going on, but no one was quite sure what to do about it, which led to many years of misdiagnoses and unnecessary testing.

In 2009, I had what I now know to be a significant flare up in my neck. The lump was biopsied in five different places and at the same time, I had a CT scan on my neck, abdomen and pelvis. It was during the investigation of the CT that the radiologist suggested that maybe I had FOP, however, that would be rare given my age and my normal toes. After this, I had genetic testing, with the doctor also saying it was highly unlikely to be FOP, as he had seen a patient previously with the condition. The results came back and confirmed that indeed, I did have FOP, but a variant form that had only been reported in one other patient at the time.

FOP robs a person of their mobility joint by joint. The body reacts as if there were trauma to the tissues and ossifies, leaving strips of bone in places where it shouldn’t, and locking joints into place. This can sometimes be overnight in extreme cases. It is a cruel disease. Most people with FOP experience severe physical disability. There are many don’ts with FOP, such as avoiding trauma, no intermuscular injections and avoiding falls.

Whilst it can be overwhelming to live with FOP, there are benefits that only a person with a rare condition can know. One thing you don’t get told when you are diagnosed is that you will get a new family, your rare disease family. For me, my family is spread far and wide. I have not met most of my family in person but they are always there for support and guidance on any topic without judgement, as I am for them. Without them, this journey would be immeasurably harder. There are only 19 people in Australia and two in New Zealand who have FOP. We are a small but close knit group who rely on each other for support and I am grateful for their help in times of need.

I am very lucky, given my late diagnosis and unnecessary invasive procedures, to be reasonably mobile. I am married to my husband, Brendan, and we live with our two pets, Penny and Gracie. I currently work four days a week and am also the chair of RVA Partner, FOP Australia.

FOP Australia was founded in 2015 as the charity to help people and support those with FOP and their families in Australia and New Zealand. During my time on the board, I have been able to complete a Diploma of Business (Governance) under part scholarship from the Women’s Leadership Institute Australia and Institute of Community Directors Australia. With the knowledge that I have gained from this course, I hope to help FOP Australia and our community as we move forward towards a treatment for FOP.

Thursday 23 April is FOP Awareness Day which is celebrated globally — it was on this day in 2006 that the gene for FOP was discovered. This significant discovery has helped progress FOP research which will hopefully lead to a treatment. This year, FOP Australia is participating by selling #Sockfie4FOP within our community, to raise awareness of FOP and help to raise funds for much needed support and research.