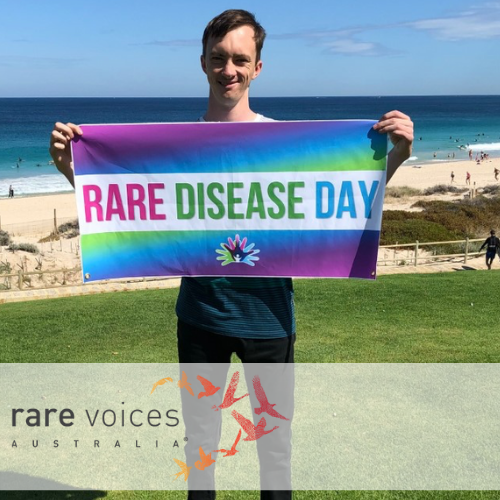 This month’s personal story highlights the amazing efforts of Andrew who organised for a total of 35 landmarks in Australia and around the world to be lit up for 2020 Rare Disease Day. We congratulate Andrew for his incredible efforts and thank him for sharing his personal story with the rare disease community this month. Click here to view pictures from Rare Disease Day. Read Andrew’s story, written by his mum, Anne.

Andrew is 28-years-old and was formally diagnosed with a complex Cortical brain malformation when he was 17 called Periventricular nodular heterotopia (PVNH) with overlaying Polymicrogyria (posterior subtype) and Cerebellar hypoplasia. It is a mouthful to say but after so many years, it was a relief to have a formal diagnosis. He was also born with two other malformations, one being club feet. Currently, we are waiting for whole exome sequencing results to see if a reason can be found to explain Andrew’s diagnosis.

PVNH means there are nodules of neurons in the wrong place around the ventricles as the neurons did not migrate correctly. Polymicrogyria means many small folds – Andrew has more brain folds than what is normal. His cerebellum is a quarter of the size of a normal cerebellum and this affects his speech, balance and movement. Andrew is extremely fortunate that he has no health issues and that he has had no seizures. The occurrence of epilepsy for people who have PVNH and/or Polymicrogyria is very high.

Andrew did not walk until he was three and a half and did not speak till he was six and a half. When you have a child who has no known syndrome it is very hard. There is no support group – it is just the child and the family working at every issue that arises, hoping that what they are doing is the best thing for their child. We made the decision to give Andrew as much help as possible to ensure he reached his full potential. By the time he was 15, he’d already had 20 operations. His life growing up was constant doctor and therapy appointments, hospital visits as well as many other appointments with various health and educational professionals.

It wasn’t until another appointment with a geneticist when Andrew was 15-years-old that he was referred for another MRI. The results for this MRI were sent to a neurologist in Melbourne and it was he who finally gave us a formal diagnosis. There are a small number of people in Australia who have similar brain changes and with club feet but there is no one who is exactly like Andrew.

Andrew started playing sport at about seven-years-old. He enjoyed Little Athletics and Cross Country and competed at many Australian junior and senior championships.  He has always been interested in cycling so we purchased a folding trike and Andrew rode it constantly but as he grew taller it became too small. It was also unsuitable to ride at high speed. We looked for alternatives and eventually in January 2014, we managed to borrow an old racing trike. Andrew loved it and we applied for a grant and in November 2014, Andrew’s racing trike was finally here.

Andrew has won numerous Australian Paracycling titles for his classification (T2) since 2015 and this year, he won the Male Australian Paracycling champion for the National Road series run by Cycling Australia. He was awarded a West Australian Sports Institute cycling training scholarship last year. Andrew loves cycling and he thinks nothing of going on a 100km ride. He loves riding with his cycling group or just with a few friends. Sport has been the best thing for Andrew.

Andrew works part-time and volunteers at the Children’s Hospital, which he loves. He enjoys giving back to the community. In 2019, for Rare Disease Day, he decided to do a hill climb that is very challenging and rode 30 circuits on this hill in an hour and a half. His cycling group also raised funds for Rare Disease Day.

In August 2019, for PVNH day, Andrew organised for six landmarks and buildings in Australia and around the world to light up. He got the idea from the Canadian lady who runs PVNH awareness day – she had organised a local landmark to light up in 2018, so Andrew decided in 2019 to help out. This year, he decided to see how many places he could get to light up for Rare Disease Day and at this stage he has 35 in total.

Andrew’s motto is “Everyday Matters” and his love for sport and giving back to the community help him to live by this motto.